GOLFERS UNITE! A new handicap system is on the way

Sometime next year, hopefully in January, golfers from all around the world will be united through a new handicap system, which is appropriately known as the World Handicap System. It will replace the current Golf Handicap and Information System (GHIN) and combine six systems currently being used.

According to the United States Golf Association (USGA), the WHS will “bring the game of golf under a single set of rules for handicapping and provide a more consistent measure of players’ ability between different regions of the world.”

I don’t know the “how details” but from what I’ve read, the WHS will:


I’m very much interested to know more of the details. My wish, though, is for a system that considers how overall well someone plays a round or several rounds. It would require a more detailed look at hole-by-hole scoring and not just a nine-hole or an 18-hole total score. As examples, consider the following three scenarios:

Golfer A has a GHIN index of 7.3 and shoots a 79. Within the 18 holes, he has one birdie, 10 pars, six bogeys, and one double bogey. That’s about right when the score and the index are compared. Golfer A’s handicap fluctuates based on scoring a few more birdies or a few less bogeys.

Golfer B has a 15.4 index and has a 91, a little high for his index. He has eight pars, four bogeys, three double bogeys and a triple bogey. Golfer B’s handicap could be lower if he could get a handle on those doubles and triples.

Golfer C is the anomaly to the system. He has 16.1 index and shoots an 86. On this day, which is like many other rounds he’s had, Golfer C has two birdies, seven pars, five bogeys, one double bogey, and three triple bogeys. His 86 includes 14 holes of three-over par golf and four holes of 11 over par. Those four holes, based on his handicap, would be allowed in the WHS.

Bottom line: Golfer C is much better than his handicap shows, and the handicap system does not take that into account. His birdies, pars and bogeys are a display of his ability. His triples came from hitting a couple of lousy shots and not concentrating after reaching the green where he three putted. His 86 could have easily been an 82 or 83. His index over his last 12 months of posting ranges from 15.3 to 17 as a result of less than a handful of holes each round.

There is probably no handicap system that’s perfect. Hopefully every golfer is trying to get better with each round and not trying to maintain a higher index just a score a few dollars at the end of the day.

REMINDER: Make sure you’re posting your score after each round. There’s an easy-to-use App for the GHIN system, and there’ll probably be one for the WHS. And, be honest with yourself by posting your correct score. Some players knock off a stroke or two, thinking their score is too high; some players think a score is too low to post and don’t post. Same is true of unusually high scores. In either case, you’re cheating yourself and your fellow players. By the way, according to the USGA, failure to post a score is a no-no and can result in the posting of a “penalty” score, usually an ever par score. Don’t let this happen to you.

For more on posting scores, go to Questions and Answers about Handicapping.
Posted by Jim Pomeranz at 3:44 PM No comments: Links to this post 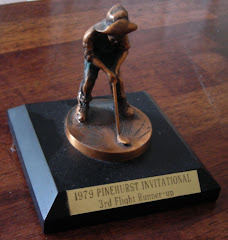 Do you have a Putter Boy? I do. I won this at the 1979 Pinehurst Invitational. Runner-up in the 3rd Flight. 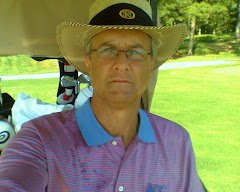 Jim with Mildred the Bear 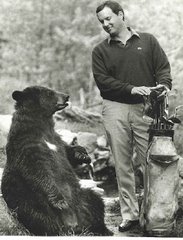 Jim's the one on the right. The photo was taken on Grandfather Mountain by Hugh Morton. 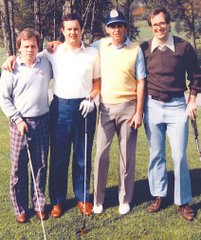 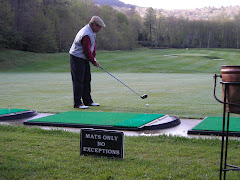 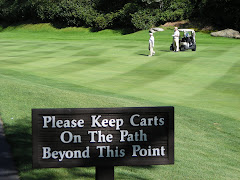 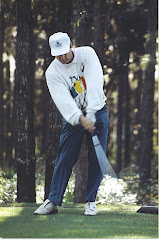 Hey, my head's down!